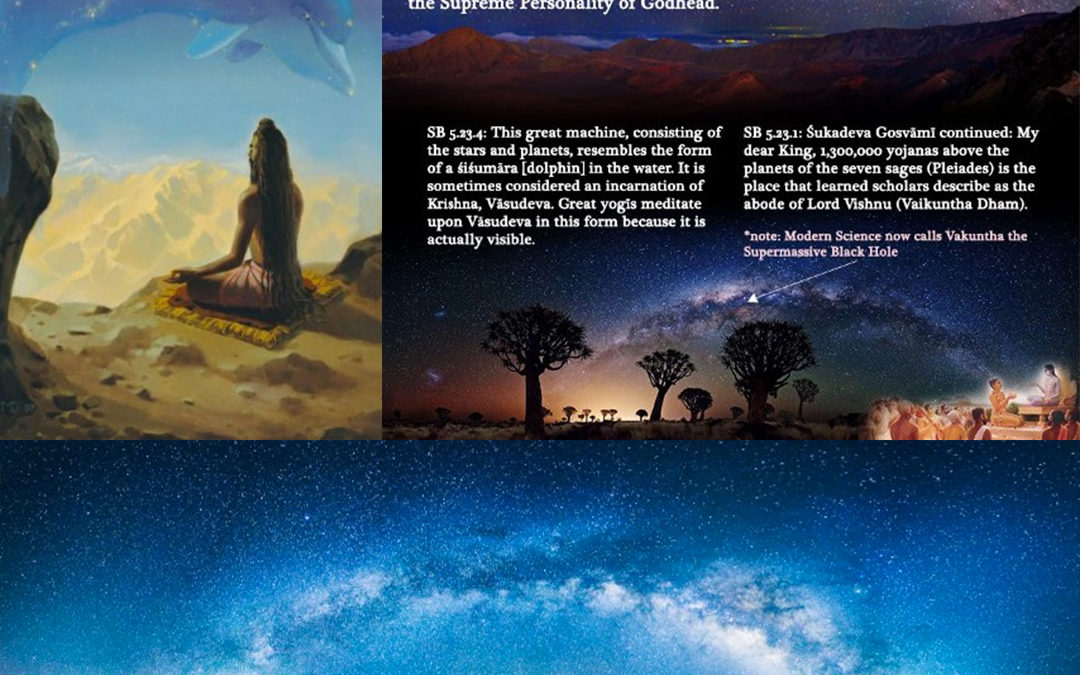 The mystical meditation on the Sisumara Planetary System. Yogis meditate on the form of the universe whose description is given in the Srimad-Bhagvatam where the form of all the planets and stars all connect to appear like a dolphin.

The form of the Lord is where the head is in a downward position, it’s body appears like a coiled snake. On the end of the tail is Dhruvaloka (North Star), on the body of the tail are Prajapati., Agni (God of fire), Indra and Dharma (Gods of water and law), and on the root of the tail are Dhata and Vidhata (other Gods). On the hips are Seven Sages like Vashishta and Angira. The entire body of the Sisumara faces towards the right and appears like a coil of stars. On the right side of the coil are 14 prominent stars form Abhijeet to Punarvasu (Vedic names of stars). On the left are 14 from Pusya to Uttarasadha. The stars Punarvasu and Pusya are on the right and left hips of the Sisumara. Yogis worship the Sisumara planetary system which is also known as the Kundalini-Chakra. This is also indicated to show how the body is balanced by an equal number of stars on either side of the body.

The rotation of the Transcendental Dolphin form accounts for the North Poles (Polaris, Dhruvaloka), the stars situated at the top of the Tail and the Southern Division on the plane of the Earths rotation stars and celestial bodies are considered the head of the Sisumara.  Due to the curved body or Sisumara and the rotation of the stars, we see Dhruvaloka rotate in one direction, while the stars at the opposite end of Sisumara rotate in the opposite way exactly as you would expect when considering the rotation of a body at opposite ends.

On the back of the Sisumara is the group of stars know as Ajavithi, on its abdomen is the Ganges that flows in the sky (The Milky Way). On the right and left sides of where the loins might be on the Sisumara-Chakra and the stars names Punarvasu and Pusya. Arch and Aslesa are on it’s right and left feet, Abhijit and Uttarsadha on the right and left nostrils, Sravana and Purvasadha are at its right and left eyes, and Dhanishtha and Mula are on its right and left ears. The eight stars from Magha to Anuradha, which mark the northern course, are on the ribs and right side. Stabhisa and Jyestha are on the right and left lower chin, Yamaraja on its mouth, Mars on its genitals, Saturn on the back of the neck, Jupiter on the chest, the Sun and Narayana at the core of the heart. Within its mind is the moon, on the navel is Venus and on the breasts are Asvini-Kumaras. Within the life air, which is known as pranapana is Mercury, on the front of the neck is Rahu, all over its body are comets, and inits pores are the millions of stars.

This form of the Sisumara is explained as the external form of the Lord Vishnu, the Supreme Lord. Yogis meditate /worship this form at morning, noon and evening. This is the resting place of Lord Vishnu which forms the Sisumara-Chakra and is the resting place of all the Demigods, stars and planets. One who meditates on this form 3 times a day, morning, noon and evening will be surely freed from all sinful reactions. Meditating on this beautiful form of the universe is ideal for a yogi to humble themselves to become fit for surrender unto the Lord and is considered the highest stage of Yoga.

Any cookies that may not be particularly necessary for the website to function and is used specifically to collect user personal data via analytics, ads, other embedded contents are termed as non-necessary cookies. It is mandatory to procure user consent prior to running these cookies on your website.