The Master of all the universes 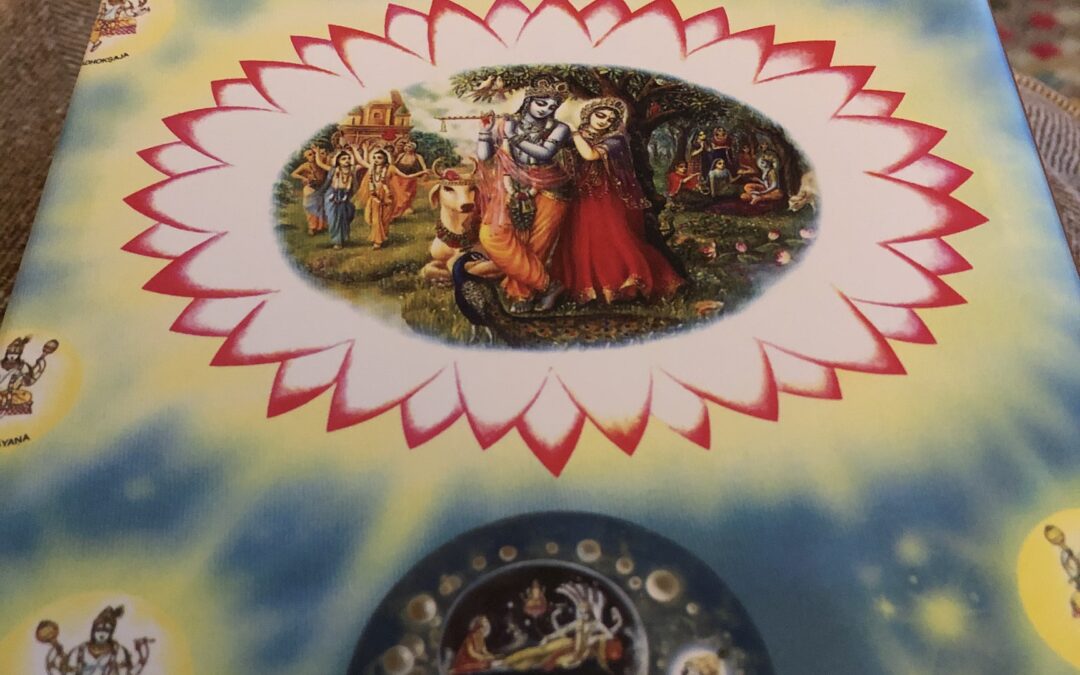 Namaste, a short explanation of this Divine illustration taken from the Srimad Bhagvatam.

1. In the centre we have the original spiritual planet, which resembles the whorl of a lotus flower, it is called Goloka Vrindavana. It is the abode of Lord Krishna, the original Personality of Godhead.

2. This original planet Goloka throws off a spiritual ray of effulgence called Brahmajyoti which is the ultimate goal of impersonalists.

3. Within the unlimited Brahmajyoti, there are unlimited numbers of spiritual planets, as there are innumerable material planets within the sun rays of the material universes. These spiritual planets are dominated by planetary expansions of Lord Krishna, and the inhabitants are ever-liberated beings. They are all four handed. The Lord is known there as Narayana, and the planets are known as Vaikunthas.

4. Sometimes a spiritual cloud overtakes a corner of the spiritual sky of Brahmajyoti, and the covered portion is called mahat-tattva. The Lord then, by His portion as Maha-Vishnu, lies down in the water within the maha-tattva. The water is called the Causal Ocean (karana-jala)

6. In each and every universal globe the same Maha-Vishnu enters again as Garbhodakasayi-Vishnu and lies there on the garbha ocean on the serpentine Sesa incarnation. From his navel-abdomen sprouts a lotus stem, and on the lotus, Brahma, the Lord of the universe, is born. Brahma creates all living beings of different shapes in terms of desires within the universe. He also creates the sun, moon and other demi-gods.

7. The sun is situated almost in the center of each and every universe, and distributes profuse light and heat all over the universe. There are millions and billions of suns of all the millions and billions of universes within the maha-tattva. The suns and moons are required within the universes because they are dark by nature. The Vedas instruct us to go out of the dark universes to reach the glowing effulgences, the Brahmajyoti.

8. The Brahmajyoti is due to the illuminating Vaikuntha planets, which need no sun or moon or power of electricity.

Srimad-Bhagvatam helps us to reach the supreme planet, Goloka Vrindavana. The door is open for all. Human life is meant for this particular aim, for it is the highest perfection.

This website uses cookies to improve your experience while you navigate through the website. Out of these cookies, the cookies that are categorized as necessary are stored on your browser as they are essential for the working of basic functionalities of the website. We also use third-party cookies that help us analyze and understand how you use this website. These cookies will be stored in your browser only with your consent. You also have the option to opt-out of these cookies. But opting out of some of these cookies may have an effect on your browsing experience.
Necessary Always Enabled
Necessary cookies are absolutely essential for the website to function properly. This category only includes cookies that ensures basic functionalities and security features of the website. These cookies do not store any personal information.
Non-necessary
Any cookies that may not be particularly necessary for the website to function and is used specifically to collect user personal data via analytics, ads, other embedded contents are termed as non-necessary cookies. It is mandatory to procure user consent prior to running these cookies on your website.
SAVE & ACCEPT